In this Week’s Issue:

• Spot Gold rose to yet another record above $1,474 per ounce (Reuters)
• Spot Silver above $40 per ounce for the first time since 1980 (Reuters)
• WTI Oil futures price above $113, Brent Crude oil above $126 on Friday (AP)
• The Dollar under renewed pressure as U.S. budget deadline looms (WSJ)
• China to let Yuan be traded against a wider variety of currencies (AP)
• Australian dollar above 1.05 highest in 29 years against the U.S. dollar (Reuters)
• European Central Bank raised interest rates by a  quarter point to 1.25% (AP)
• Bank of England kept its benchmark interest rate at a record low of 0.5% (Bloomberg)
• Portugal seeks bailout and becomes 3rd victim of European debt crisis (AP)
• Nasdaq 100 rebalancing will slash Apple’s weighting from 20.49% to 12.33% (Reuters)
• Moody’s has cut Portugal’s long-term government-bond rating to Baa1 from A3 (WSJ)
• China raised rates for the 4th time since October; one-year lending rate at 6.31% (AP)
• China’s consumer prices rose 4.9% in February, driven by an 11% jump in food costs (AP) Macke’s Purple Crayon
Traders aren’t known to be of the quiet introspective kind; there is typically not enough time to be too analytical when the clock is ticking and your positions are exposed to market risk. Instead, most traders stick to a few rules that are time-tested and work in practice. To learn a few of these rules including some color recommendations, please consider the often controversial but always entertaining Jeff Macke.

Chart Of The Week

Speaking of purple crayons, this week’s markets caused a much higher than usual consumption of purple crayons, at least in our office. While Mr. Bernanke maintains the view that inflation is under control, commodity prices have been on fire, reaching a number of new records (see weekly snapshot above). In this context, I’d like to add one more rule to Mr. Macke’s purple crayon rules: Don’t fight the trend!

Whether you believe in technical analysis or not, one of the most effective tools in terms of establishing major trend-lines is indeed the purple crayon (you may of course use a different color of your liking). It has one overarching purpose: Determine the major price trend and make sure your position is in line with that trend. Now let’s examine one more chart in addition to Jeff Macke’s examples:  Silver! 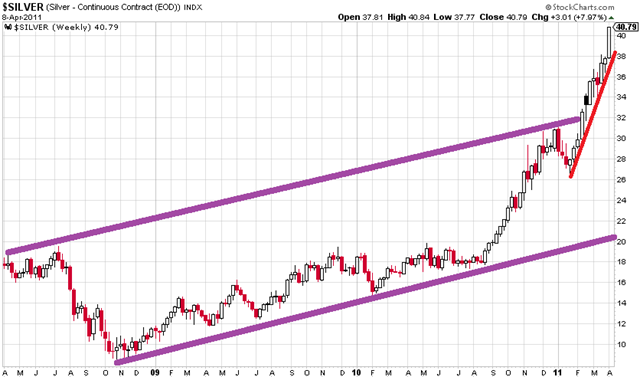 As the purple crayon shows, the underlying long-term trend is up. But we are also using another color (red) to indicate a hot trend. Silver has indeed been red-hot as it broke through the major trend line on the upside earlier this year.  If you are long silver, congratulations! How much higher can we go from here? According to some recent analyst reports, $50 is the next target. Having said that, you may still want to use one of Jeff Macke’s exit rules and set a stop below the (red) trend line this time. We probably won’t see a change in the overall trend (purple) in the near-term, but if Macke is right in terms of taking some money off the table, you may consider yet another rule: Don’t get married to your position(s). Or, as Jeff Macke puts it:

“Love is for your kids and your dog, not for your investments.”

Things That Make You Go Hmm…
In light of the possible U.S. government shutdown over the debate on the debt ceiling, the inquiring mind is pondering about the Presidential Proclamation of April as the “National Financial Literacy Month.” As the proclamation notes:

Americans’ ability to build a secure future for themselves and their families requires the navigation of an increasingly complex financial system. As we recover from the worst economic crisis in generations, it is more important than ever to be knowledgeable about the consequences of our financial decisions. During National Financial Literacy Month, we recommit to improving financial literacy and ensuring all Americans have access to trustworthy financial services and products.

Clemens Kownatzki, MBA is an adjunct professor of financial risk management at the Graziadio School of Business and Management, as well as the founder and CEO of FX Investment Strategies, a Registered Investment Advisor. In addition to running his investment advisory firm, he is a contributing author at SeekingAlpha.com and BusinessInsider.com. He also publishes the popular investment blog www.fxinvestmentstrategies.com along with a weekly newsletter.
Disclaimer
Neither the information nor any opinion contained in this communication constitutes a solicitation or offer by us to buy or to sell any securities, futures, options or other financial instruments or to provide any investment advice or service. Each decision by you to do any investment transactions and each decision whether a particular investment is appropriate or proper for you is an independent decision to be taken by you. In no event should the content of this communication be construed as an express or an implied promise, guarantee or implication by or from us that you will profit or that losses can or will be limited in any manner whatsoever. Past results are no indication of future performance. Please note that there is no requirement and no commitment to make any payments to FX Investment Strategies LLC in order to access our published information be it via email or via website publication. All information is publicly available without any required monetary consideration.  Any payments or donations made by you are deemed to be voluntary and cannot be considered as payments for investment advice given to you.
April 8, 2011
Market Wrap
Share