Still No Signs Of Inflation?
Producer and consumer prices reported small up-ticks while more significant signs of inflationary pressures came from the Far East where Chinese consumer prices rose 5.4%.  Perhaps more significant, albeit not immediately evident, is the hidden inflation through the decline in the value of the U.S. Dollar.  Having witnessed the drastic price increases in gold, silver, oil, and other commodities, it is rather puzzling how Fed officials can still maintain the view that inflationary pressures are benign.

In this context, please consider a very concise Review and Outlook on the U.S. Dollar by Axel Merk and Kieran Osborne. Their view of inflation and the prospects for the U.S. Dollar do not mirror the Fed’s optimism.

“Inflation manifests itself through a decline in purchasing power of the dollar, or said another way, weakness in the value of the dollar. Indeed, from the date of Bernanke’s Jackson Hole speech through March 31, 2011, the U.S. dollar declined 8.52%, as measured by the U.S. Dollar Index.”

Chart Of The Week
Gold and silver prices shot up to ever new highs this week. The recently heard targets of $50 for silver and $1,600 for Gold are now in clear sight. Bubble territory it would seem and yet, the rally may have just started if you’re in the camp of the gold bugs who predict price rises above $2,000 and higher. Critics of the gold bulls will point out that gold, being a commodity, does not provide any inherent yield other than price appreciation. But holders of gold couldn’t care less, having enjoyed gains outpacing nearly every other investment in the past few years.

Although gold has a mixed record as an inflation hedge, it is currently the preferred vehicle to insure against a fall-out from Mr. Bernanke’s printing press. Gold has had a dramatic rise, but the precious metal is not at its peak when valued in Australian Dollars. This gives you a different view of dollar weakness indicating a loss of value in currency as well as in commodity terms. Please consider the chart below to get a sense of what Merk & Osborne meant when they referred to the “decline in purchasing power of the dollar.” 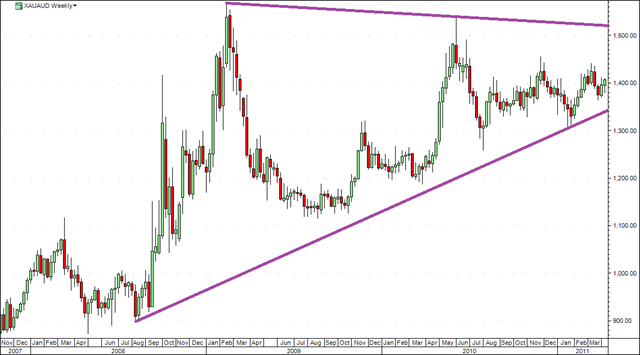 Recommended Video
The fact that the majority of fund managers DO NOT outperform the market has been documented numerous times. Here’s a very simple and yet compelling view as to why average investors should favor low cost index funds over Mutual Funds. Please consider Are Mutual Funds a Scam?

Clemens Kownatzki, MBA is an adjunct professor of financial risk management at the Graziadio School of Business and Management, as well as the founder and CEO of FX Investment Strategies, a Registered Investment Advisor. In addition to running his investment advisory firm, he is a contributing author at SeekingAlpha.com and BusinessInsider.com. He also publishes the popular investment blog www.fxinvestmentstrategies.com along with a weekly news-letter.
April 15, 2011
Market Wrap
Share