Chart(s) Of The Week
Friday’s employment data were encouraging and somewhat in line with the stock market recovery, albeit with a longer than the usual six-month time lag. Earlier in the week, housing data suggested a slightly darker picture however. This leaves a lot of questions open, particularly when so much stimulus effort by the Fed has been on inflating asset prices. While asset prices in general have been on the rise, housing is the 400-pound gorilla that no stimulus effort so far has been able to prop up. 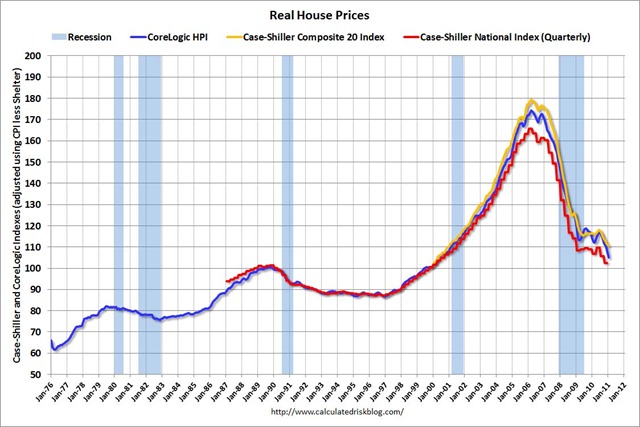 To get a sense of what more realistic housing prices might look like, please consider the concept of price-to-rent ratios as displayed in the chart below. A chartist might look at this trend and suggest that prices will revert to the mean over a longer period of time but that prices can also over and under-shoot the trend by a considerable margin (same logic applies to the chart above). 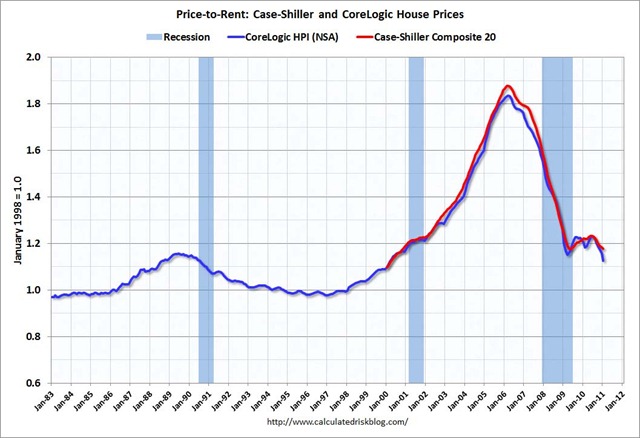 In hindsight, it also shows how insane it was to assume that housing prices must continue to climb when it was so much more expensive to buy than to rent. Moreover, as the chart below shows, the U.S. housing market was not the “most insane” of all real estate bubbles. 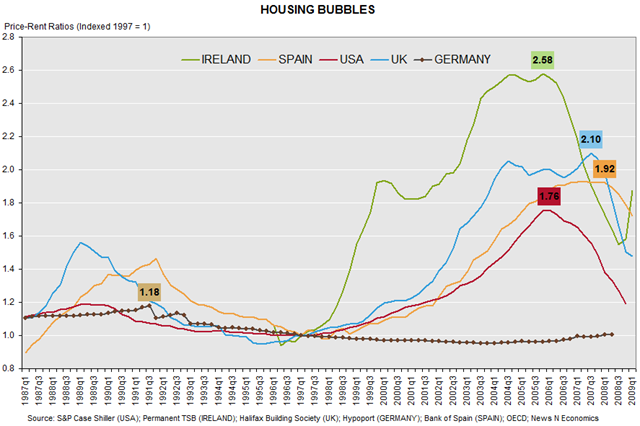 The Untouchables
It would be much more pleasant if this was about the movie “The Untouchables” but sadly, it’s about different kinds of untouchables, namely Social Security, Medicare, Medicaid, and Military Spending (a.k.a. entitlements). This warrants a revisit to our previous commentary on the state of USA Inc.

With $1.2 trillion under management, PIMCO is one of the biggest players in the investment world. When its founder Bill Gross speaks, the investment world usually listens. Granted, one can never completely disregard the fact that a large market player is talking his book, but there seems to be a genuine concern by Mr. Gross that the business of capitalizing ever-increasing amounts of debt is driving this country over the edge. In his Monthly Investment Outlook he notes:

This country appears to have an off-balance-sheet, unrecorded debt burden of close to 500% of GDP! We are out-Greeking the Greeks, dear reader.

His quote may sound far-fetched at first, but it is it’s not inconceivable that the Fed may face much higher borrowing costs if current discussions about the debt ceiling and budget deficits continue to focus on lame budget cuts that amount to no more than a tiny fraction of the current deficit. Just to remind ourselves, a typically highly publicized debate on cutting say $10bn is only about 0.6 percent of the current $1.6 trillion deficit—meaningless. In all this, politicians on both sides of the political spectrum continue to display a frightening lack of numerical proficiency.

But fear not, the ongoing deficit discussions will eventually focus on the “Untouchables” not by choice but by necessity. Who knows when that tipping point arrives. For now, let’s look at the 10-year treasury yields of some of the troubled European nations and take this as a reminder that our leaders are playing with fire and with the financial future of this great nation.

Clemens Kownatzki, MBA is an adjunct professor of financial risk management at the Graziadio School of Business and Management, as well as the founder and CEO of FX Investment Strategies, a Registered Investment Advisor. In addition to running his investment advisory firm, he is a contributing author at SeekingAlpha.com and BusinessInsider.com. He also publishes the popular investment blog www.fxinvestmentstrategies.com along with a weekly newsletter.
Disclaimer
Neither the information nor any opinion contained in this communication constitutes a solicitation or offer by us to buy or to sell any securities, futures, options or other financial instruments or to provide any investment advice or service. Each decision by you to do any investment transactions and each decision whether a particular investment is appropriate or proper for you is an independent decision to be taken by you. In no event should the content of this communication be construed as an express or an implied promise, guarantee or implication by or from us that you will profit or that losses can or will be limited in any manner whatsoever. Past results are no indication of future performance. Please note that there is no requirement and no commitment to make any payments to FX Investment Strategies LLC in order to access our published information be it via email or via website publication. All information is publicly available without any required monetary consideration.  Any payments or donations made by you are deemed to be voluntary and cannot be considered as payments for investment advice given to you.
April 1, 2011
Market Wrap
Share